Chausathi Yogini Temple of Ranipur Jharial is situated in Balangir District, Odisha, is one of the circular, open air Yogini temples of India, dedicated to the 64 Yoginis. It appears to be an early temple from soon after 900 AD, and the presence of other temples indicates that it was an important site at that time. The surviving central shrine holds an image of dancing Shiva; all the Yogini images are, uniquely, similarly shown dancing.

The Chausathi Yogini Temple is widely popular as Ranipur-Jharial Temple which are two villages near the temple. The Chausathi Yogini Temple was built in the 9th or 10th century in Ranipur – Jharial village in the district of Balangir, Odisha. The temple is located around 33 Kms from the Titilagarh Town and around 26 Kms from Kantabanji Town of the district of Balangir, Odisha. The temple is a Circular, Hypaethral, 64-yogini temple made of sandstone, some around 50 feet in diameter. The site is on an outcrop of rock, must have been important, given the presence of a large temple built of brick and several small temples of stone. The primary entrance is an opening in the circular wall towards the east; unlike at the Hirapur yogini temple, there was once a further opening towards the south, now filled in.

Ranipur-Jharial was the first of the Yogini temples to be discovered; it was described by Major-General John Campbell in 1853.

At the centre of the temple is the original shrine with four pillars, holding an image  of Nateshwar Shiva as Lord of Dance. The Shiva images is three-faced and eight-armed, and is depicted with urdhva linga, an erection. Elephant-headed Ganesh and the bull Nandi are shown in the image’s base. The similar-sized image of the goddess Chamunda in the temple may once have been housed with Shiva in the central shrine.

The Ranipur Jharial Yoginis are made, like the temple walls, of a low-quality coarse sandstone, which has weathered poorly; they were once finely-carved. Uniquely, all the Yogini images are depicted poised about to dance, in the Karana pose of Indian classical dance; Vidya Dehejia explains that the posture is taken up at the start of each group of movements. Like the Hirapur temple, but unlike other Yogini temples, there are no Matrikas, mother goddesses, among the Yoginis. 14 of the Yoginis are animal-headed; among them can be seen goddesses with 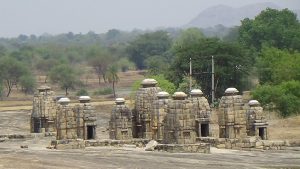 the heads of a cat, an elephant, a snake, a horse, a buffalo, an antelope, and seemingly also of a leopard and a sow. The leopard-headed goddess is holding up a human corpse, suggestive of the corpse rituals (shava sadhana) of the Yogini cult. The absence of haloes or attendant figures as at later Yogini temples suggests that this temple was built relatively early.

The 19th century archaeologist Alexander Cunningham described two further Yogini images. One, uniquely, had the attributes of the Sun-god, Surya; she had two arms, a lotus flower in each hand, and seven horses. The other (now surviving only from the knees down) was dancing on a reclining male; she had 6 or 8 arms, and was depicted pulling her mouth open wide; she held a skull-cup, a kettle-drum, and a sword.